” Chile, the early 1970s. A violent far-right nationalist group is looking to overthrow Allende’s government. Amid the fervour of crime and conspiracy, group members Inés, her husband Justo and their best friend Gerardo pull off a political crime that changes the course of history. The shadow of betrayal kept them apart for 40 years until Gerardo decides to jumpstart the nationalist cause of his youth.

Now, Inés is powerful businesswoman with a reputation to protect. As the police monitor Gerardo and his growing home arsenal, she will do whatever it takes to keep him from revealing her dangerous political and sexual past.”

It’s our third collaboration (Machuca 2004, The Good Life, 2008) and this time, Andres asked me to be Creative Consultant. The premier international screening of Araña is at the Toronto festival (TIFF) on 6 September and its European premiere at the the San Sebastian festival on 24 September. Sorry I cannot be there to see it but I wish Andres all the best of luck for for the film in the “Latin Horizons’ competition. 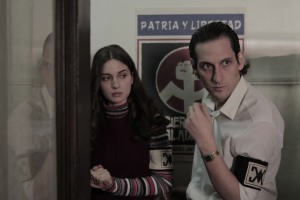 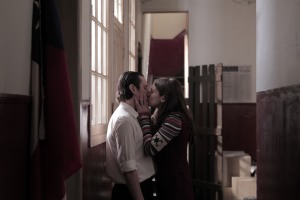 In Chile a piece of legislation is progressing through parliament, the Ley Machuca, the Machuca Law, which will make it mandatory for every school, public and/or private, to make a percentage of places available to girls and boys from the shanty towns and slums.

Why Machuca? At the centre of Andres Wood’s vastly successful Machuca is a friendship between a middle-class boy, Gonzalo, and Pedro Machuca, from a shanty town, who meet in Gonzalo’s Catholic private school following Allende’s policy of sending kids from the slums to private schools. Of course, after Pinochet’s coup, Machuca and kids like him were thrown out. Machuca is one of Chile’s most successful films. In just over a decade since its release it has become a classic and is on the syllabus of most schools, colleges and universities in Chile. It is even included in the UK’s A-level Spanish syllabus. But the Machuca Law is something different. At a time when Politics and Media have become the same thing, Machuca has escaped beyond the media. It promises to influence the lives of thousands of children and their prospects thereafter.

Discussion with Andres Wood at the BFI Southbank

Mamoun Hassan was on hand to introduce the contemporary classic, Machuca, one of his Spanish language collaborations at the National Film Theatre on Thursday 1 September.
David Somerset, of the BFI, spoke to director Andres Wood live from Santiago de Chile via Skype, with Mamoun on hand, about the development of the script and the filming of this highly acclaimed and influential film. Despite a few technical hitches, the discussion was lively, and gave an insight into the production process and the inspiration behind it.

Special thanks must go to David Somerset, who organised the event, for his cool head when Skype occasionally lost connection with Chile, and for his enthusiastic support over the past years. Making Machuca. The child actors were not professionals With Andres Wood in Oslo

Mamoun has just returned from the FILMS FROM THE SOUTH festival in OSLO
where he accompanied his close friend, co-writer and producer colleague
the leading South American director ANDRES WOOD to showings of his three
latest works:

Andres’ latest work VIOLETA WENT TO HEAVEN  took the World Cinema Jury
Prize at SUNDANCE FILM FESTIVAL 2012 and is appearing at this week’s BFI
LONDON FILM FESTIVAL and will be on theatrical release in North America
from November.

Mamoun will be attending the Films of the South Festival with Andres Wood in Oslo, 6th -8th October, for the screenings of Machuca, La Buena Vida and Violeta is alive in Heaven.