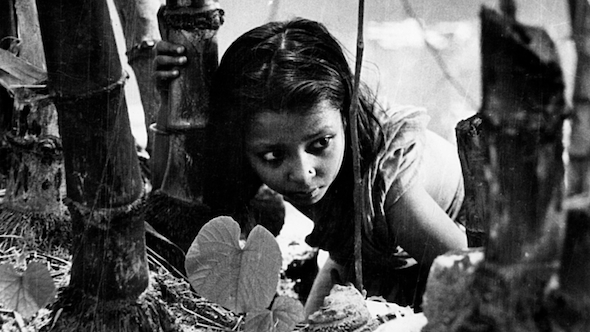 Although it has been a while since the release of the magnificent Criterion box set of ‘The World of Apu Trilogy’, it is worth reflecting on some of the the responses to the ‘extra’ Mamoun contributed to the set.

The Criterion forum  Chris Galloway wrote: ‘We next get a piece on the trilogy, featuring the former head of the BFI, Mamoun Hassan. Entitled The Apu Trilogy: A Closer Look, it features Hassan offering a rather thorough examination of the trilogy as a whole, giving detailed analysis of Ray’s framing, how he introduces characters, the flow of editing, and how the visual language of the films can be broken down into “sentences and paragraphs.” He goes through each film, talking about particular scenes and sequences. It’s lengthy at 43-minutes but found it a very strong scholarly supplement that does make up somewhat for the lack of commentaries, an item that I’m surprised is missing from the set.’

Brian Tallerico on RogerEbert.com : “”This is Ray’s first film, and it is amazing.” So says Mamoun Hassan in a fantastic, detailed examination of “The Apu Trilogy” included in the amazing array of special features on the Criterion release. Hassan, the former head of the British Film Institute, breaks down the movies beat by beat, with such attention to detail that you further appreciate the filmmaking in new ways.”

Peggy Earle of HamptonRoads.com cited Mamoun’s extra as the ‘best extra’ in the collection. “Mamoun Hassan, former head of the British Film Institute, gives a fine overview of the trilogy, Ray’s directorial style, and the significance of the three films. He points to Ray’s ability to show emotions with no dialogue, and urges viewers to “give themselves up” to the films. “Ray had ambiguity. And that’s why we participate in his films. He’s given us room to interpret.””

Jake Cole for Slant magazine – “For a deeper dive into the films themselves, a 43-minute analysis from filmmaker Mamoun Hassan is so minutely observed that even actors’ body language and orientation to the camera is fodder for discussion.”

It is always nice to be appreciated, and we must acknowledge the work of Abbey Lustgarten of Criterion, who worked with Mamoun on the extra with amazing focus, crafting it into the final product.