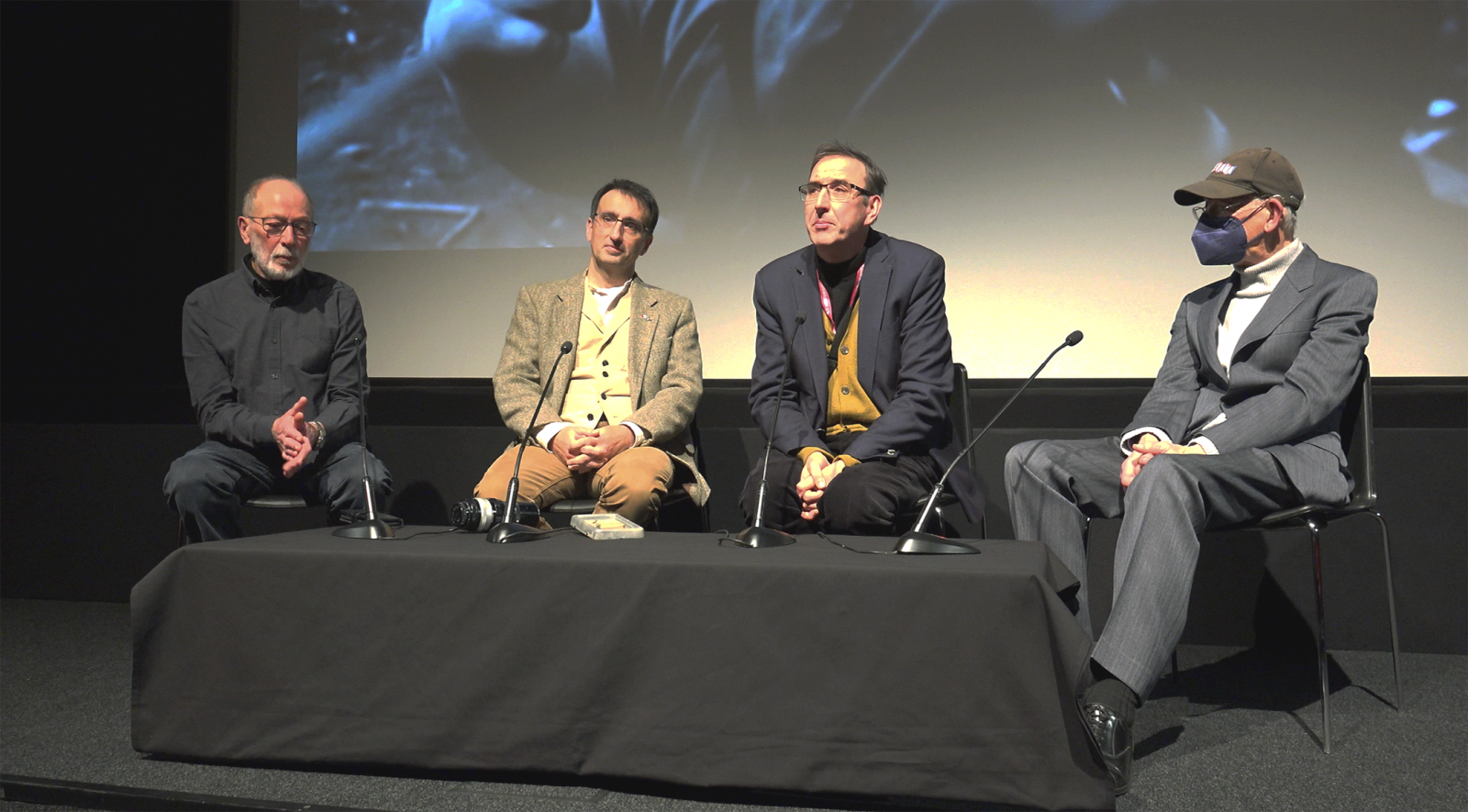 Movie Masterclass would like to thank David Somerset, Film Programmer and Education Curator at the British Film Institute, for hosting a wonderful event at the National Film Theatre Screen 1 on Monday 9 January, to remember the early days of Mamoun’s film career which he shared with Chris Menges and Kevin Brownlow.

9 Dalmuir West – a documentary made for the British Film Institute in 1962 about the last tram in Britain, shot in Glasgow and directed by Kevin Brownlow – assisted by Mamoun as second cameraman.

The Meeting – Mamoun’s first film as writer, producer and director, a short drama without words shot at Great Malvern station in 1964, featuring John Stokes and Cleo Boman, photographed by Peter Suschitzky and edited by Dave King.

Wild and Free: Twice Daily – a cinéma vérité documentary, made in 1969, about the travelling Robert Brothers Circus, directed and photographed by Chris Menges, edited by Mamoun, and with music by David Fanshawe. The film was bought by ATV and was the last black and white documentary film to be broadcast by the company – all subsequent documentaries were in colour.

After the screenings, Sherief Hassan, chief editor of moviemasterclass.com, joined David Somerset, Kevin Brownlow and Chris Menges for a Q&A, when members of the audience expressed surprise that Mamoun had not gone on to become a director, following his early success with The Meeting, such a powerfully affecting short film. The film was shot on ‘short ends’, donated leftover film stock from a feature film (the budget was zero for this self-teaching experiment). It won a prize at the 1965 Oberhausen Film Festival and had international distribution through United Artists. Audience responses to the film brought out anecdotes from Mamoun’s varied career, which led him away from directing to become Head of the BFI Production Board in the 1970s, Managing Director of the NFFC in the 1980s and Head of the Directing Department at the National Film and Television School (where the Movie Masterclass sessions were filmed).

Sherief produced a couple of Mamoun’s treasured reminders of working with Kevin and Chris: first, the tram’s side-view mirror, salvaged from the last tram before it was incinerated, which had captured the eyes of Sadie the tram-driver; second, a large vintage zoom lens, given to Mamoun by Chris in lieu of payment for the last week’s work on editing Wild and Free. Chris said the circus film ‘had Mamoun stamped all over it’.

How things began: Mamoun had ‘dropped out’ from a safe career path in electrical engineering to follow his true passion – film. Inspired by his friend John Stokes, the ‘prisoner’ in The Meeting, who was a student at the Slade School of Art while Mamoun was at UCL, Mamoun exploited every connection he knew to get any role in the film industry. After several rejections he finally rang a ‘Mr Brownwell’, whose first words to him were: ‘I was wondering when you were going to call.’ Mr Brownwell turned out to be young Kevin Brownlow. After going for coffee – and a blazing argument – Kevin decided Mamoun was the most intelligent person he had ever met and offered him a job as his assistant in the Soho cutting-room where he was working for a documentary production company.

Mamoun’s wife, Moya,, his closest family and friends appreciated David’s introduction, which included warm words about Mamoun’s contribution to cinema. Kevin and Chris also paid tribute to Mamoun’s enthusiastic collaboration on their films in those early days. The Movie Masterclass website team of Sherief, Moya, and assistant editor Suzanne Watts are keen to keep Mamoun’s legacy alive through the curation of his archive and the editing and eventual publication of his memoirs, unfinished at the time of his death in July 2022.

We took inspiration from the event, where so many people showed their appreciation of Mamoun and the effect he had on their careers and personal aspirations. We were especially delighted by tributes paid by Burt Caesar and Ra Hendricks to Mamoun’s work in raising the profile of the Afro-Caribbean community through the 1980 film Babylon.

For now, Sherief takes on the presentation of screenings of films that Mamoun produced and supported. We are hoping to bring back Mamoun’s trademark style of Movie Masterclass to promote cinema education for everyone.