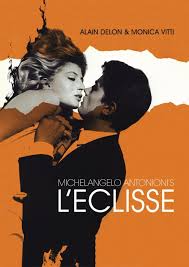 Join me in March at the National Film Theatre, London to see two outstanding Italian films which knock the stuffing out of most of modern cinema.

Dominic Power, Head of Screen Arts at the National Film and Television School, has invited me to provide an introduction to Antonioni’s L’Eclisse as  part of NFTS/NFT’s Passport to Cinema.  The film is often seen as part of a trilogy of L’Avventura (which won a Special Prize at the Cannes 1960 ‘For a new movie language and the beauty of its images‘); followed by La Notte(1961) and culminating in L’Eclisse (1962). All three starred Monica Vitti, who was Antonioni’s inspiration, muse and, for a while, his companion.  These films are more than fifty years old  so qualify as antiques. But apart from the cars and clothes (fashion photography cannibalised L’Avventura and unconsciously feeds off it still) the films feel mint new. I am pleased to be invited by David Somerset, BFI Education Programmer/ Curator to hold a  masterclass on Rossellini’s ROME OPEN CITY .

A towering work which heralded Italian Neorealism. After nearly seventy years, Neorealism still inspires filmmakers. It is a strong seed that continues to find suitable soil somewhere in the world.

Tickets for both shows are available online from the BFI.